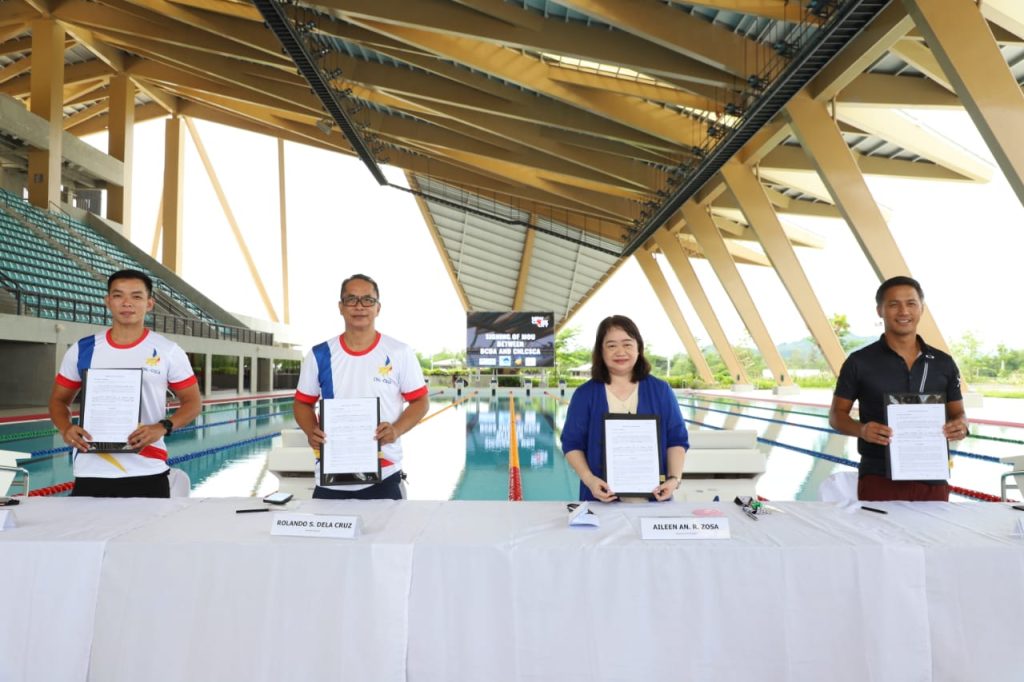 The agreement paved the way for the resumption of CNLCSCA’s grassroots swimming series, which was halted for over two years with the onset of the COVID-19 pandemic. Hosted by the Angeles City-based AC Dax Aquatics Swim Club, the 80th CNLCSCA Swim Series will commence Saturday at the New Clark City Aquatics Center, with 650 participants from Central and North Luzon, Cordillera Administrative Region, as well as some swimmers from Metro Manila.

BCDA Officer-in-Charge President and CEO Atty. Aristotle B. Batuhan, represented by Executive Vice President Aileen R. Zosa, and CNLCSCA Secretary General Rolando Dela Cruz led the signing of the MOU, which provides for collaboration over a period of one year, and renewable for another year.

“We at the BCDA would like to thank CNLCSCA for choosing New Clark City as your venue of choice for competitions and events. As restrictions continue to ease, BCDA will ensure that this world-class facility remains accessible to athletes of all ages and backgrounds,” Zosa said.

Acknowledging CNLCSCA’s efforts to develop grassroots athletes, Zosa said, “We hope to bear witness to the emergence of a new generation of talented, promising, and outstanding swimmers who can compete on the national and international stage.”

“By incredibly hosting the 30th Southeast Asian Games, we believe that New Clark City is a really good venue for promoting our goals of developing the grassroots program benefiting our athletes. We want them to experience how it is like being in a place where magnificent opportunities are possible,” Dela Cruz said.

Following FINA competition rules, the 80th CNLCSCA Swim Series will be conducted with timed finals based on the participants’ age groups.

Jensen “Dax” Halili, CNLCSCA director and the head coach of the AC Dax Aquatics Swim Club, expressed excitement about the return of competitive swimming for local swimmers, with New Clark City as the venue.

“There will be more than 600 swimmers who will participate from different walks of life. We believe that they truly need this boost and motivation amidst the pandemic by competing in our world-class facilities,” Halili said.

Health and safety protocols will be strictly enforced during the swim series to protect all participants, coaches, and staff.