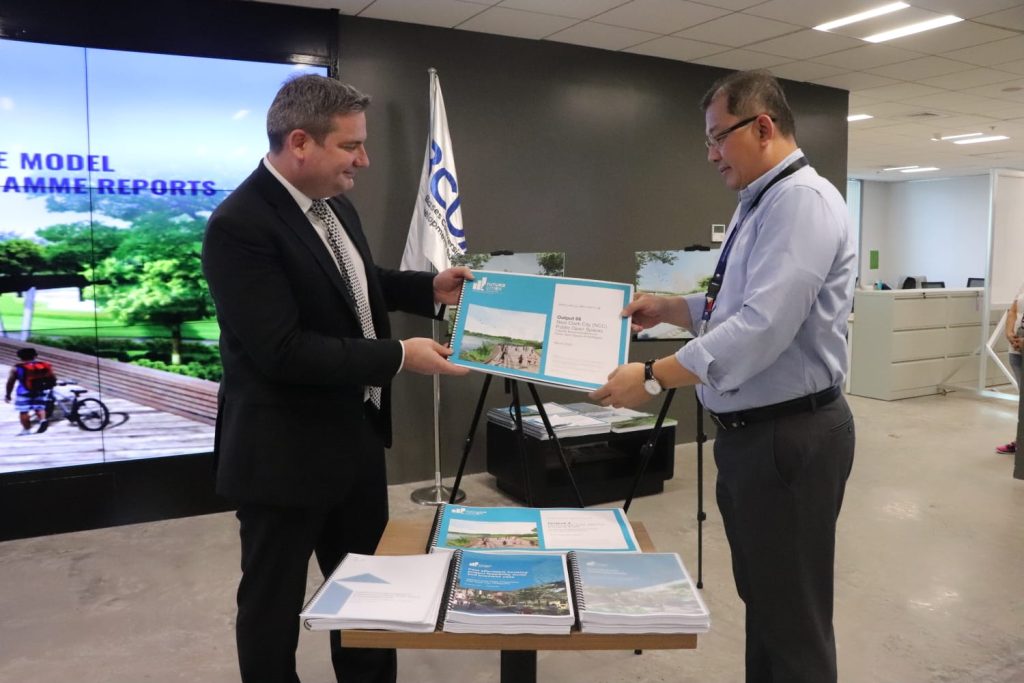 The British Embassy Manila has turned over its Global Future Cities Programme (GFCP) final reports to the Bases Conversion and Development Authority (BCDA), paving the way for the implementation of an integrated sustainability plan at New Clark City in Tarlac.

The ceremonial turnover was accompanied by the presentation of the architectural scale model for the sustainable and climate-responsive New Clark City Central Park, a 44.8-hectare open recreational space which will become one of the largest public parks in the Philippines.

As a nod to the significance of the event, the turnover was held on April 29, just moments before BCDA’s 30th anniversary celebration with employees, management, British embassy dignitaries and other guests in this rising metropolis of the future.

Atty. Aristotle B. Batuhan, BCDA’s Officer-in-Charge President and CEO, formally received the final reports and scale model from Alistair White, deputy head of mission of the British Embassy Manila, during ceremonial rites at the BCDA office in Clark Global City. It marked the delivery of commitments under the memorandum of understanding (MOU) that BCDA signed with the embassy, through the United Kingdom Foreign and Commonwealth Development Office (UK FCDO), in September 2020.

The outcome of these reports is an Integrated Sustainability Plan covering the Central Park design, a 33.89-hectare affordable housing project, and the establishment of a sustainability unit in New Clark City.

“BCDA is honored to receive the scale model and GFCP final reports from the British Embassy Manila. This body of knowledge will provide us an invaluable blueprint to achieve the vision of New Clark City as a robust, thriving urban center without the blight. We will now move forward with more confidence and guidance in building New Clark City as a sustainable, green and resilient growth center for all Filipinos,” Batuhan said.

Ensuring that the outputs would be reflective of the community’s sentiments, feedback was incorporated from representatives in the academe, business, sports and tourism sectors, partner government agencies, and more.

“The Global Future Cities programme of the FCDO was designed to help urban cities reduce poverty and gender inequality, have cleaner air and safer environments that are resilient to disasters and crises. And I’m delighted to know that we have taken huge strides towards those goals since the signing of our MOU in September 2020,” White said.

New Clark City, envisioned as a model economic hub outside of Metro Manila, was selected as a pilot area of the GFCP, an official development assistance (ODA) technical assistance program that supports sustainable and inclusive development in 19 cities in 10 countries worldwide.

One key outcome of the report is the setup and action plan of a sustainability unit in New Clark City. This early, the United Nations Sustainable Development Goals (SDGs) are already being integrated into BCDA’s programs and projects as part of its performance scorecard, namely the ones for: a) industry, innovation and infrastructure; b) decent work and economic growth; c) good health and well-being; d) partnerships for the goals; and e) sustainable cities and communities.

White noted that the completion of the framework establishing the sustainability unit “will make BCDA as the first-ever government organisation to localise the SDGs and embed sustainability principles at the very core of your operations.”

Under the New Clark City master plan, 60 percent of the 9,450-hectare land area is reserved for forests, open spaces and parks. Meanwhile, only 40 percent will serve as the developable area.

Unveiling the future
Casting a vision of what lies ahead for New Clark City, White and BCDA Chairman of the Board Gregorio Garcia led the unveiling of the architectural scale model of the Central Park development.

Set to rise at the heart of the metropolis, New Clark City Central Park is designed to reduce urban environmental risks by considering the existing topography, biodiversity, water resources and drainage networks.

It prominently features a lake that functions as a water retention pond to mitigate flooding, and serve as an ecologically managed area for the preservation of natural habitats.

A “no-cut policy” will be enforced in the park for threatened tree species, based on classifications by the Asian Development Bank (ADB). As a green lung, the area can serve as a carbon sink that absorbs carbon dioxide from the atmosphere, and converts it into oxygen. 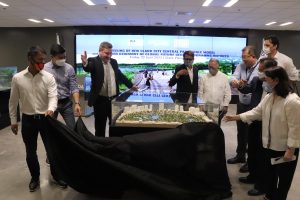