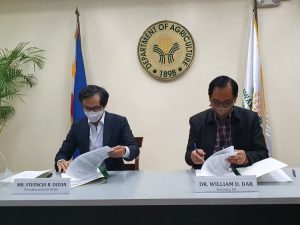 The Department of Agriculture (DA) and the Bases Conversion and Development Authority (BCDA) signed a memorandum of agreement (MOA) on Friday, December 18, to develop an inclusive agribusiness hub in New Clark City.

New Clark City will be the first site of DA’s “Agro-industrial Business Corridors” (ABC) to be established across different regions to attract more investments in the agriculture sector. The 50-hectare ABC in New Clark City seeks to introduce innovative agricultural technology to farmers, and to provide them with access to quality seeds. The first phase of the project will involve putting up the first National Seed Technology Park (NSTP).

“Alam niyo ang kahalagahan ng buto: it represents life itself because it sustains the life of a crop. Itong araw na ito ay mahalaga because we are starting to realize the vision for putting up the future of agriculture that we want to have,” Secretary Dar said. “We want to work out what are the component strategies that will make it possible for this country, really being an agriculture country, to unleash its potential as a major pillar of the economy.”

Dizon also highlighted infrastructure investments in the region and New Clark City’s resiliency, making the new metropolis a strategic location for the ABC.

“Kinakailangan lagi tayong handa to face the many challenges—especially unknown and unpredicted challenges—that we may have in the future and this pandemic really highlighted how important this is,” he said.
The DA will start the development of the agribusiness hub with a seven-hectare land where the NSTP will be built. The NSTP, which will include a seed laboratory and mini-seed production farms, will allow the development of all types of seed varieties to ensure access to high-yielding seeds.

The other components of the first phase of development include incubation hubs, a Project Management Office, and other institutional developments of the DA.