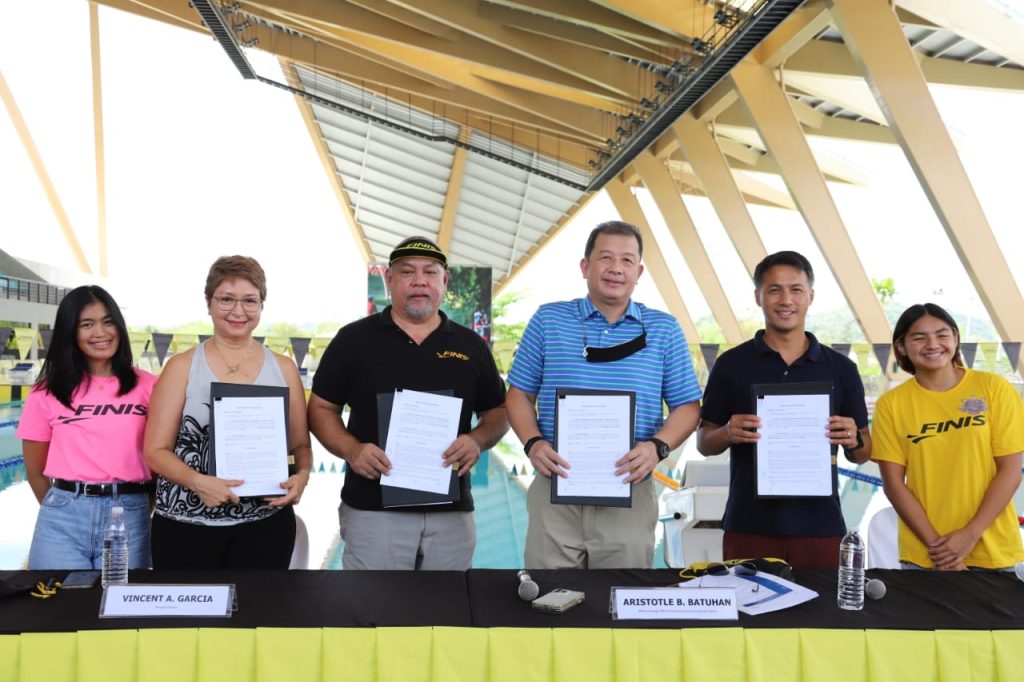 Giving a boost to Philippine sports amid the country’s transition to the new normal, swim gear company Finis Philippines has partnered with the Bases Conversion and Development Authority (BCDA) to jumpstart sports activities and deliver grassroots competitions at New Clark City in Capas, Tarlac.

BCDA Officer-in-Charge President and Chief Executive Officer Atty. Aristotle. B. Batuhan and Finis Philippines Managing Director Vince Garcia on Friday signed a memorandum of understanding (MOU) signaling the start of collaborative efforts to promote New Clark City and to hold various events in the sports facilities in the area.

Under the MOU, both parties are eyeing sustained cooperation over a one-year period, and renewable for another year.

“We at the BCDA would like to thank Finis Philippines for choosing New Clark City as their venue of choice for its competitions and training camps. With the country now shifting to the new normal, the BCDA is looking forward to opening its doors to more swimmers and athletes in New Clark City, giving them access to world-class sport facilities,” Batuhan said.

Positioned as the new premiere sports destination in the country, the New Clark City sports complex is the first major sports hub built by the government since the completion of the Rizal Memorial Sports Complex in 1934.

Finis Philippines is the sole authorized distributor of US-based swim gear brand Finis, which specializes in technical devices used for swim training and competition, as well as technical swimwear. Its training products are widely used by elite swimmers and swim coaches in the US, Australia, Europe and Asia.

“Finis exudes elite swimming since all its training gear innovations are developed to make the best of the best. We only find it fitting that we kick off our very own swim competitions with the best and only global standard facility in our nation. This is precisely why we chose BCDA and its New Clark City Aquatics Center,” Garcia said.

Elite Filipino swimmers were in attendance at the Aquatics Center as a show of support for the partnership between BCDA and Finis. They include Kyla Soguilon, multiple winner of the Athlete of the Year award by the Philippine Sportswriters Association, and national swimming team record holder Jasmine Mojdeh.

Also during Friday’s event, BCDA and Finis signed the letter agreement for the hosting of the 2022 Short Course Swim Competition Series – Luzon leg on March 26 to 27, and the first Kids of Steel (KOS) Triathlon on March 27 at the New Clark City Aquatics Center.

The two-day short swim competition series’ heats will have timed finals, sorted into eight age groups based on the participant’s age as of December 31, 2022. The best swimmers in each category will have a chance to compete for the Finis National Finals this June, also at the New Clark City Aquatics Center.

Meanwhile, the KOS Triathlon, officially sanctioned by the Triathlon Association of the Philippines (TRAP), will continue the grassroots level of scouting potential young triathletes. Promising participants may be asked to join the developmental training program of TRAP.

“Our hearts go out to all kids that were cooped up for two years. It has affected their social skills in interacting with other kids, as well as other people. When Level 1 restrictions of the pandemic were announced, we thought that it was the perfect time to have the kids to finally come out and play. Sports is very important to hone the life skills of kids and we should all nurture that,” Garcia said.

Garcia added that, ”Once we get our momentum, we have other sports to host in the near future. In the pipelines are the Finis Long Course Swim Competition Series, Open Water Swim Races, Aquathlons, and lots of swim-related training clinics to develop everyone to love the sport of swimming.”

To protect the health of the staff and participants, BCDA and Finis assured that minimum health and safety protocols will be strictly implemented during the events.