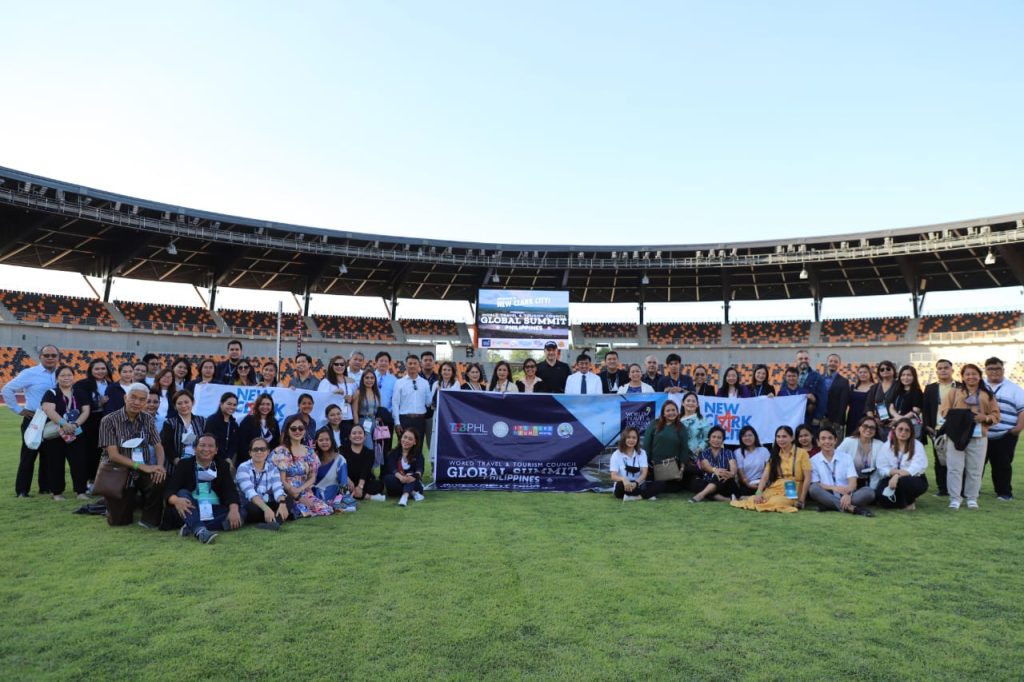 Delegates of the 21st World Travel and Tourism Council (WTTC) Global Summit in Manila visit the New Clark City Athletics Stadium as part of their investment tour of Clark and New Clark City on April 23, 2022.

The Bases Conversion and Development Authority (BCDA) and its subsidiary, the Clark Development Corp. (CDC), hosted on April 23 an international delegation of travel industry leaders from the World Travel and Tourism Council (WTTC), the global body representing the travel and tourism private sector and its industries, in an investment tour of New Clark City and the Clark Freeport Zone.

The investment tour was the final activity for delegates of the 21st World Travel and Tourism Council Global Summit held in the Philippines from April 20 to 22, the council’s second major in-person gathering since the outbreak of the COVID-19 pandemic.

WTTC delegates were given presentations at the new Clark International Airport passenger terminal, and tours of the Clark Freeport Zone and New Clark City, where the closing ceremony was held. The new Clark terminal, an airport finalist in the 2021 Prix Versailles Architecture and Design awards, will open up increased travel, business and mobility north of Metro Manila.

Seeking to showcase developments and attract investments in Clark and New Clark City, the activity was organized by BCDA, CDC, the Department of Tourism (DoT), the Tourism Infrastructure and Enterprise Zone Authority (TIEZA), and the Luzon International Premiere Airport Development (LIPAD) Corp., BCDA’s operations and maintenance provider for the new Clark terminal.

Clark and New Clark City were the key investment destinations showcased for the summit attendees, whose tour itinerary primarily included top Philippine tourist attractions such as Boracay Island in Aklan and El Nido, Palawan. The BCDA, CDC and the Subic Bay Metropolitan Authority (SBMA), an affiliate of the BCDA Group, were among the government agencies that presented investment offerings to the delegates.

Atty. Aristotle B. Batuhan, BCDA Officer-in-Charge President and Chief Executive Officer, said the WTTC visit came at a perfect time as Clark and New Clark City are playing increasingly critical roles in enabling the local tourism industry and the Philippine economy transition to the new normal.

“The BCDA has always believed that the vision for New Clark City as a smart, resilient, sustainable and inclusive metropolis of the future deserves to be on the world stage. What better way to do this than to let international tourism leaders experience in person the excitement that is building here in New Clark City. We at the BCDA are thrilled to host our WTTC guests and show them how far we’ve come in making this vision a reality,” Batuhan said.

Batuhan added, “Opportunities for travel, sports tourism and strategic investing will become even more accessible after New Clark City reopens its doors to the public, and when the new Clark International Airport Terminal begins operations in the coming weeks.”

For his part, CDC President and Chief Executive Officer Manuel R. Gaerlan said, “We are delighted to welcome the World Travel and Tourism Council delegates to the Clark Freeport Zone. Their presence provides us with an excellent opportunity to highlight the exciting tourism developments in Clark. At the same time, we hope that their visit to the Freeport will underscore Clark’s potential as a leading business location, with its stable investment climate and world-class facilities and utilities. We look forward to fostering a meaningful partnership with the members of WTTC and usher in more business opportunities and possibilities in Clark.”

Delegates were given a rolling tour of sites of interest in Clark, covering hotels, resorts, tourist sites, luxury and recreational facilities, and corporate offices. CDC continues its rise as a prime tourism and commercial hub outside of Metro Manila, with over 1,100 business locators setting up shop in the freeport.

For the New Clark City leg of the investment tour, the spotlight was also on world-class sports facilities in the rising metropolis, including the Fédération Internationale de Natation’s (FINA)- approved Aquatics Center and the 525-room Athletes’ Village. New Clark City’s sports complex was a centerpiece venue of the 30th Southeast Asian Games.

The investment tour wrapped up at the Athletics Stadium, a Class 1 sports facility certified by the International Association of Athletics Federations (IAAF), which recently received a highly commended nod from the World Architecture Festival (WAF) in the Completed Buildings – Sport Category.

During the closing ceremony, delegates were treated to assorted Kapampangan and Filipino delicacies for a satisfying taste of the local cuisine and culture. 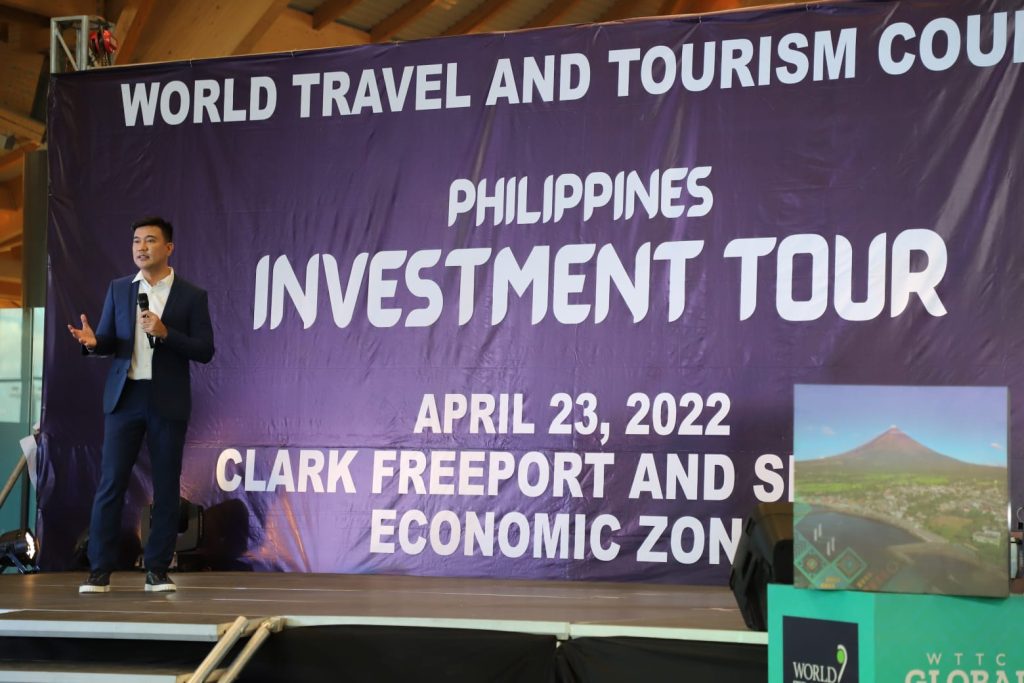 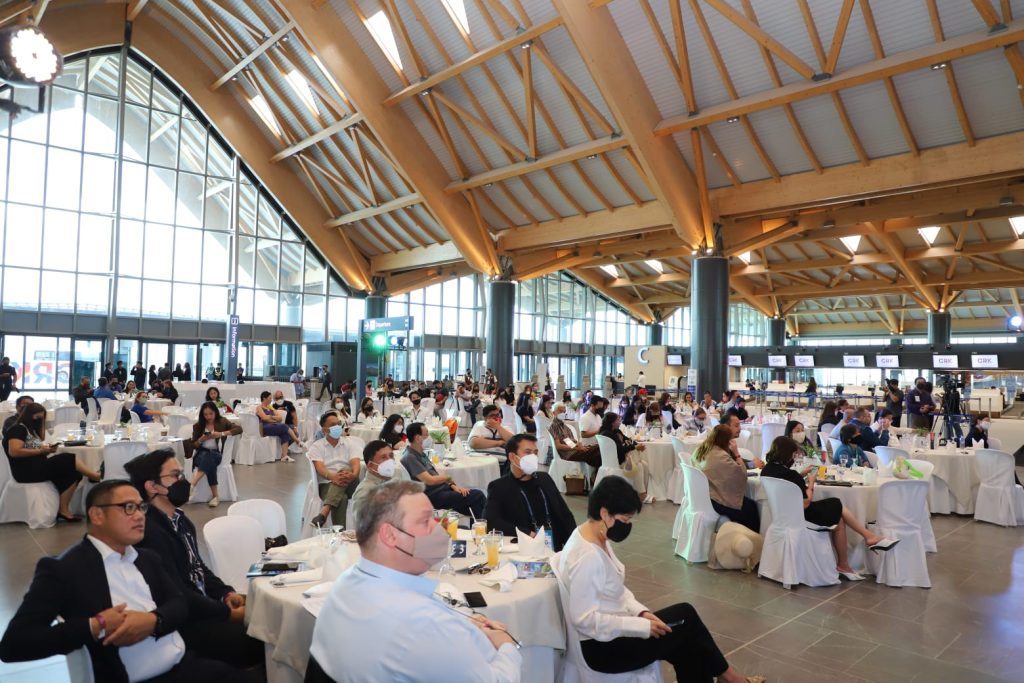 Delegates of the 21st World Travel and Tourism Council (WTTC) Global Summit, Philippine government officials and private sector partners listen to investment offerings at the Subic-Clark-Tarlac corridor during their investment tour of Clark and New Clark City on April 23, 2022.