The Bases Conversion and Development Authority (BCDA) and its partner MTD Clark, Inc. recently signed
a Memorandum of Agreement (MOA) with the Land Bank of the Philippines Leasing and Finance
Corporation (LLFC) to establish leasing and financing facilities for government agencies intending to locate
inside the National Government Administrative Center (NGAC) in New Clark City.

Under the agreement, BCDA, MTD, and LLFC will collaborate on a framework to provide a viable option
for government agencies to avail of LLFC’s leasing and financial facilities for the acquisition of an office
building or office spaces in NGAC.

“The MOA will be historic in a sense that it will not only greatly assist the fast-tracking of the New Clark
City development but will open new doors for government agencies to avail of this novel instrument, which
has not been fully utilized in the Philippines,” Dizon said.

As a naturally resilient metropolis, New Clark City will house back-up offices of various government
agencies including a world-class National Sports Center to be used for this year’s South East Asian Games.

“The signing is the start of another milestone since we have almost completed the facilities in Phase 1A of
NGAC,” MTD Clark, Inc. Chairman Isaac David said. “We thank BCDA for giving us this opportunity to be
a co-developer in this project.”

Several government agencies have expressed interest in locating in New Clark City including the Supreme
Court of the Philippines which has signed a Memorandum of Understanding with BCDA for the allocation
of a 5.8-hectare lot for its Judiciary Complex.

The New Clark City government center is among the centerpiece projects of the Duterte administration to
solve the congestion problem in Metro Manila and accelerate economic growth in the regions. 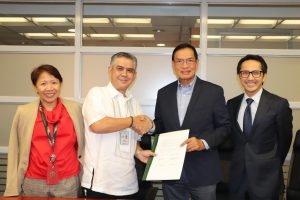