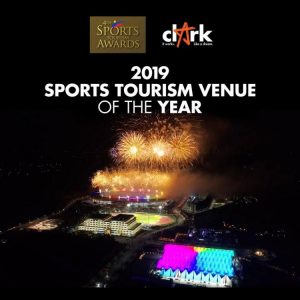 The world-class sports complex in New Clark City was cited as the 2019 Sports Tourism Venue of the Year at the 4th Philippine Sports Tourism Awards (PSTA).

Already on its fourth year, the PSTA recognized “exemplary sports initiatives from the public and private sectors who have shown interest and deep conviction in promoting sports tourism in the country during 2019.”

In a taped message, Tourism Secretary Bernadette Romulo-Puyat noted that just last year, the Philippines successfully hosted the 30th South East Asian Games (SEA Games) and “New Clark City was put on the map as a world-class venue for sports tourism and a center for national sports development.”

“We’d like to thank Secretary Vince [Dizon] for that. Beyond sports, the city’s development of roads and infrastructure paved the way for its transformation into the country’s newest hub for business and government,” she added.

In his acceptance video, Bases Conversion and Development Authority (BCDA) President and CEO Vince Dizon highlighted that the New Clark City hub—the first modern sports complex developed by the government since the 1930s when the Rizal Memorial Sports Complex was built—will benefit present and future generations of athletes.

“Our athletes and all our aspiring athletes and sports enthusiasts can use these facilities, train in them, use them for events. Our athletes no longer need to travel abroad to use world-class facilities and qualify for sporting events all over the world,” Dizon said.

Dizon added that athletes “can use these facilities and show that the Filipino is a force to reckon with in international sports.”

“Thank you very much to the Sports Tourism Awards for this honor and recognition and we promise all of our athletes that we will continue to develop this brand new city so that in the next couple of years, not only will we be able to host the South East Asian Games, but we can aspire to host bigger international sporting events in the future,” he said.

The award was received by BCDA Vice President for Business Development Arrey Perez at the Clark Marriott Hotel on Thursday night, December 10.

New Clark City was the main venue of the 2019 SEA Games where the athletics and aquatics events were held. The sports complex features a 20,000-seater Athletics Stadium with a nine-lane, 400-meter track and field oval, a six-lane warm-up track, and an indoor track; and the 2,000-seater Aquatics Center that has a 10-lane Olympic size swimming pool, a diving pool with inland diving training facility, and a warm-up training pool.

The New Clark City sports facilities will also be used by the future student-athletes of the National Academy of Sports, which is targeted to be operational by 2021, and other educational institutions to be put up in New Clark City. The new metropolis is also eyed to be the host venue of sports bubbles in aquatics, athletics, and triathlon events next year.

Clark Freeport Zone meanwhile was awarded Sports Tourism Destination of the Year by the PSTA for the third time. Clark, a haven for cyclists, runners, triathletes, other athletes and sports enthusiasts, previously received the same award in 2015 and 2018.

In 2019, Clark was the venue for other SEA Games events, including archery, rugby, baseball, softball, dance sports, petanque, and lawn bowl.