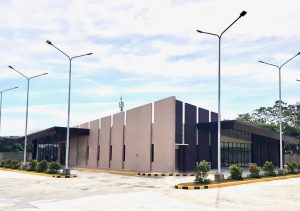 The PGH Polyclinic (Phase 1) of the Philippine
General Hospital Satellite for Sports Medicine
and Wellness (PGH-SSMW) at the sprawling
New Clark City was inaugurated Tuesday,
November 19, in time for the holding of the
South East Asian Games there from November
30 to December 11, 2019.

During the SEA Games, the PGH Polyclinic will
be equipped with a 24-hour Emergency Room
Facility, Primary Care and Sports Medicine,
Dentistry, Ophthalmology, Imaging Center (X-
ray and Ultrasound), Diagnostic Laboratory
and Pharmacy.

“We thank the University of the Philippines and the Philippine General Hospital for putting up a polyclinic
that would provide free medical and health care services to athletes participating in the SEA Games,”
BCDA President and CEO Vince Dizon said. “This facility will also greatly benefit future residents of New
Clark City, as well as the neighboring towns and provinces.”

“The University of the Philippines, through UP Manila and its training hospital, PGH, is committed to serve
the health needs of the SEAG athletes as well as the rest of the community of New Clark City,” UP
President Danilo Concepcion said.

The Memorandum of Agreement to operate Phase 1 of the PGH-SSMW will be signed by UP President
Concepcion, and National Government Administrative Center (NGAC) Phase 1A Joint Venture Chair, Mr.
Isaac David.

The PGH-SSMW is beside the New Clark City Athletics Stadium, which is part of the Sports Complex that
will serve as the national training center of Filipino athletes and host to major international sports events
starting with the SEA Games.

The complex boasts of a 20,000-seater Athletics Stadium, a 2,000-seater Aquatics Center with an Olympic-
size pool, and an Athletes’ Village which will house the SEA Games athletes, officials and volunteers.
Depending on the population growth of the community, the PGH Polyclinic will expand initially to a 25-bed
hospital and then to a 200-bed hospital. With the full development of the New Clark City decades from now,
a 1,000-bed PGH is being planned.

BCDA is implementing the New Clark City project, a 9,450-hectare metropolis that is considered a flagship
project of the national government in the northern portion of the 32,000-hectare Clark Freeport and Special
Economic Zone.