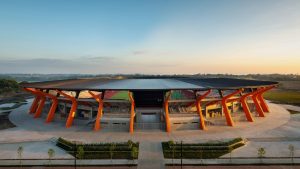 The Athletics Stadium at New Clark City in Tarlac, a centerpiece facility of the 30th Southeast Asian Games in 2019, has been shortlisted by the World Architecture Festival as among the best completed buildings across the globe.

The facility was nominated for the Sport-Completed Buildings category in the prestigious festival, which is set to take place at the FIL Exhibition Center in Lisbon, Portugal from December 1 to 3.

Bases Conversion and Development Authority (BCDA) President and Chief Executive Officer Vince Dizon welcomed the recognition and congratulated Budji+Royal Architecture+Design, the architectural partner for the stadium, as well as the thousands of workers who made the Athletics Stadium a reality.

“We thank the World Architecture Festival for giving its nod to the New Clark City Athletics Stadium. It is another testament to the ingenuity of the stadium’s design and structure. Indeed, this is more proof that Filipinos can also be champions in producing outstanding facilities that are on par with other architectural masterpieces in the world,” Dizon said. 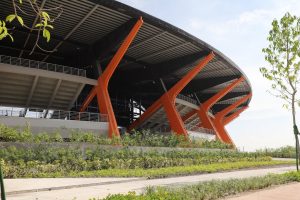 “This would not have been possible without the hard work of all the workers who completed this facility within a short period of 18 months. To our partners in Budji+Royal Architecture+Design, thank you for designing a structure that best showcases the beauty of the Filipino spirit to the rest of the globe,” he added.

Royal Pineda, principal architect and CEO of Budji+Royal, said, “To have this opportunity to share the New Clark City Athletics Stadium’s authentic nature and identity with our colleagues and an international audience makes me really very happy and proud. That was the objective anyway–to present our variety as modern Filipinos through architecture and design.”

The architect also expressed appreciation for the smooth collaboration with BCDA on the project, given the two organizations’ shared vision of a modern Philippines.

“We were on the same creative wavelength. Given critical deadlines, BCDA’s leadership was a key element. It allowed things to move with precision, which ensured timely and quality turnover, setting new government standards,” he said.

New Clark City Athletics Stadium is the first major sports hub constructed by the government since the completion of the Rizal Memorial Sports Complex in 1934.

It is also the first-ever facility in the country to receive a Class 1 certification from the International Association of Athletics Federations (IAAF).

With a 20,000-seating capacity, a nine-lane 400-meter track and field, and another four-lane warm-up track, the stadium served as a venue for the 30th Southeast Asian Games in 2019.  It was previously nominated as one of the top 10 best stadiums in the world at the annual Stadium of the Year Awards.

“The Athletics Stadium’s design was inspired by its genius loci [or the pervading spirit of a place]. It celebrates Mt. Pinatubo and Filipino resilience. The location is surrounded by beautiful mountains and a boundless horizon, which allowed the architecture to stand out and frame the natural views,” Pineda said.

Now in its thirteenth year, World Architecture Festival is one of the world’s largest architectural events, highlighted by its awards competition dedicated to celebrating and sharing international excellence in architecture. Its sister festival, the Inside World Festival of Interiors, will also take place in Lisbon on the same dates.

Due to the COVID-19 pandemic, both events did not take place in 2020. The upcoming competition, therefore, covers entries made in 2020 and 2021.

The shortlist of entries was announced last July. Those who made the shortlist will go on to compete in Lisbon this December.

Pineda said Budji+Royal is doing all the necessary preparations for the panel at the live event.

“How to best express the story behind the Athletics Stadium is critical. I’d like to be able to make the jury and audience discover and understand the status of our nation, our memories and aspirations,” he said. 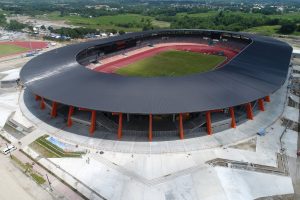